We are all refugees

Over five million Syrians refugees are now registered with the United Nations which works with countries to resettle them.  To date, 1.8 million ended up in Turkey, over one million in tiny Lebanon and over 600,000 in Jordan.  What about the U.S.?  It takes an average of 18 to 24 months for refugees to be fully vetted for resettlement in the U.S., and that is after the UN has done its own vetting.  The families of refugees have to wait all this time in camps overseas before being allowed in the country.  Since 1990, the U.S. has taken in about 73,000 refugees a year but has taken in about 2,500 Syrian refugees since 2011.  Our country will take only 10,000 refugees from Syria this year.  In the meantime,  Germany has taken 100,000 refugees, Sweden 65,000, and Hungary 55,000.  26,000 Syrian refugees have landed in Canada since November 2015. 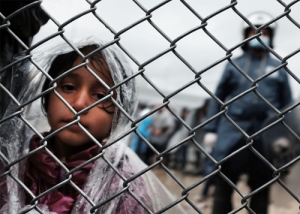 Bombings in Paris and Brussels have been used as excuses for denying Syrian refugees asylum in the U.S., or making it increasingly long and difficult to get in.  The House of Representatives passed the “American Security against Foreign Enemies Act of 2015” on November 19 2015. The Act would would require the secretary of Homeland Security, the head of the FBI and the director of national intelligence to sign off on every individual refugee from Iraq and Syria, affirming he or she is not a threat.  This is despite the fact that many safeguards already exist.  According to an analysis by the Cato Institute, the risk of a suspected terrorist slipping through this vetting process is virtually nil, making the threat from Syrian refugees “hyperbolically over exaggerated”. According to Jonathan Hafetz, it is far more likely that a future terrorist would either be born in the U.S. or attempt to enter the country on a student or tourist visa.

Fear is the main reason the United States lags far behind many other countries. But fear of what?  It only takes a drive in the ethnic neighborhoods of our American cities to understand the economic and cultural vitality that immigrants bring to the U.S.  I am one myself.  Is this fear a psychological phenomenon like the fear of flying, or the fear of melting nuclear plants, or is there something else at play?  The fear of being pushed aside in a country long dominated by a white anglo-saxon majority?  If so, will reassurances from our President, longer waits and tougher criteria ever make a difference?

This entry was posted in Society and tagged refugee, Syria, USA. Bookmark the permalink.